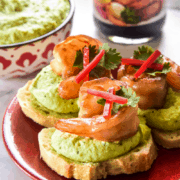 Take your appetizer game to the next level with this Teriyaki Shrimp Crostini! A delicious combination of creamy edamame hummus and grilled teriyaki shrimp, it's a flavor explosion in every bite... and perfect for summer entertaining! 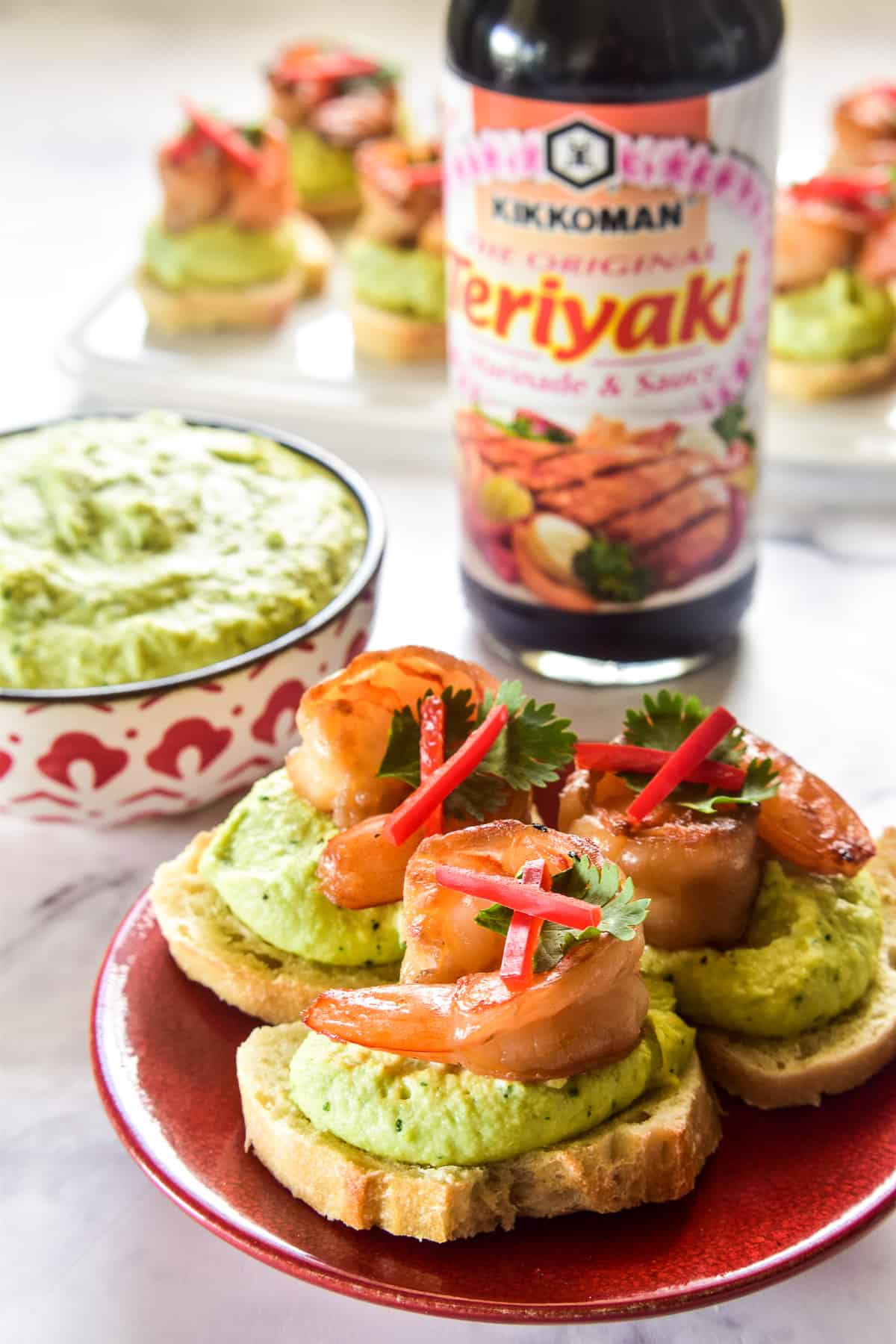 I partnered with Kikkoman to bring you this recipe. All opinions are my own.

When it comes to appetizers, you can never go wrong with crostini. It's easy to make, fun to eat, and the flavor possibilities are endless. You can make it savory, sweet, or a combination of the two... and this Teriyaki Shrimp Crostini is one of my favorites yet.

It starts with crispy baguette slices which are layered with creamy edamame hummus and grilled teriyaki shrimp... and the flavor combination could not be more amazing. It's the perfect blend of savory and sweet and the best start to any meal!

The "secret" ingredient? Kikkoman® Teriyaki Marinade & Sauce! Over fifty years ago, Kikkoman began producing the original bottled teriyaki sauce, setting the standard for teriyaki flavor ever since. I've always been a fan of Kikkoman products, and this sauce is no exception. It has a delicious depth of flavor that works equally well as a marinade and a brush-on sauce, and it instantly gives any recipe a delicious Asian flair.

If you're looking for a fun, easy, unique appetizer for your summer get togethers... look no further. This Teriyaki Shrimp Crostini is exactly what you need! 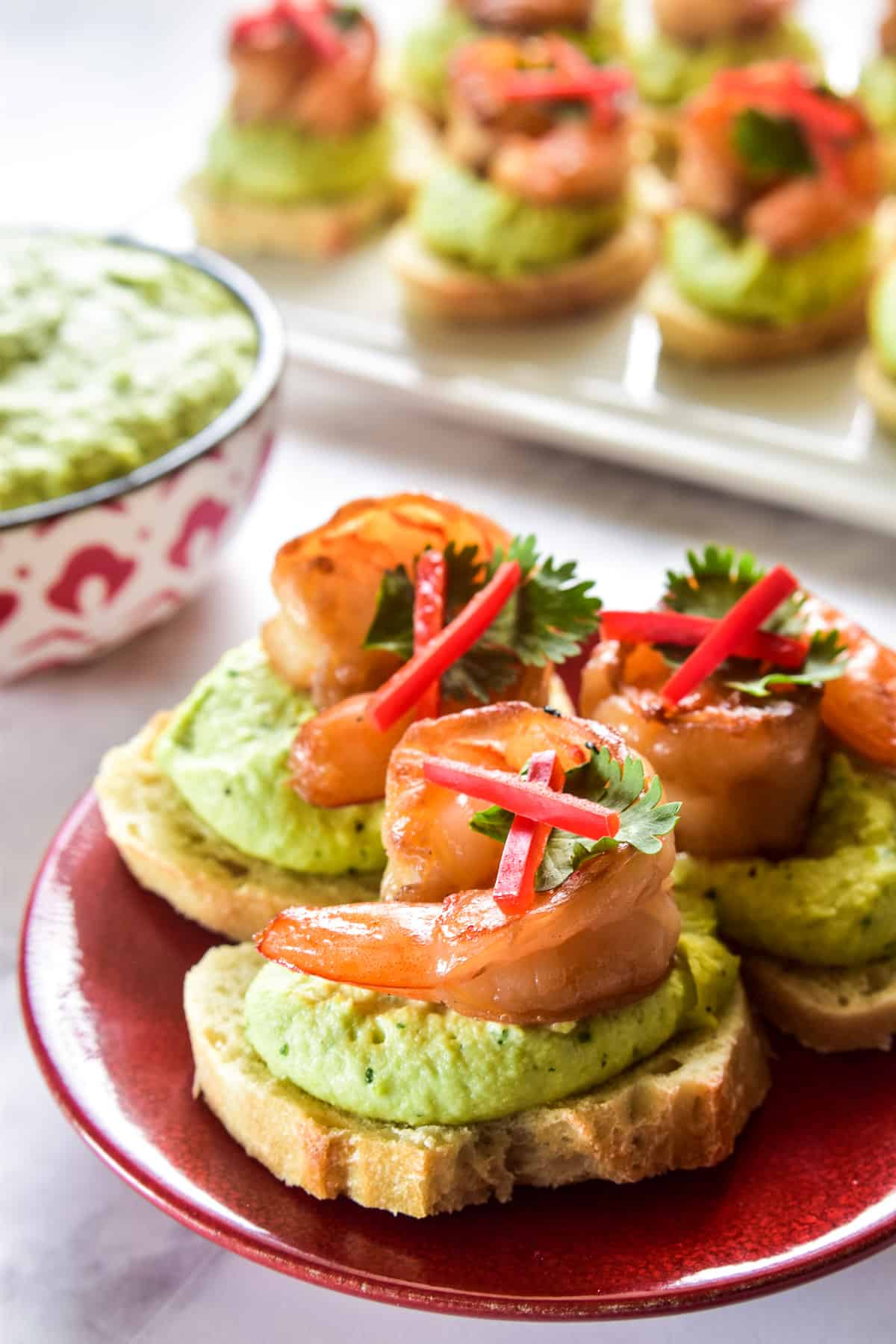 Bread - I used a French baguette, but you can also use sourdough. The key is finding a thin, crusty baguette. Day old is fine!

Shrimp - For this recipe you'll need jumbo raw shrimp that has been peeled and deveined. Smaller sizes will work, but won't fill the baguette as well.

Kikkoman® Teriyaki Marinade & Sauce - A sweet savory blend of traditionally brewed soy sauce, wine, sugar, and spices, this teriyaki sauce has a delicious depth of flavor that's perfect for marinating. You can find Kikkoman in the Asian foods aisle of your favorite retailer.

Edamame - Shelled edamame, also called mukimame, is the base of the hummus recipe. You can find it in the frozen food aisle at most grocery stores.

Tahini - Tahini is another key ingredient in the hummus, and can either be found near the condiments OR in the ethnic food aisle at your local grocery store.

Lemon juice - Lemon juice adds a delicious layer of flavor to the hummus. Either fresh or bottled juice will work well.

Olive oil - Olive oil is also used in the hummus. I used extra virgin, but you can use whatever you have on hand.

Garlic - Fresh garlic cloves add a delicious pop of flavor to the hummus. You can use minced garlic from a jar if you prefer.

Cilantro - Fresh cilantro is an optional but tasty addition to the hummus. If you're not a cilantro fan, simply leave it out. 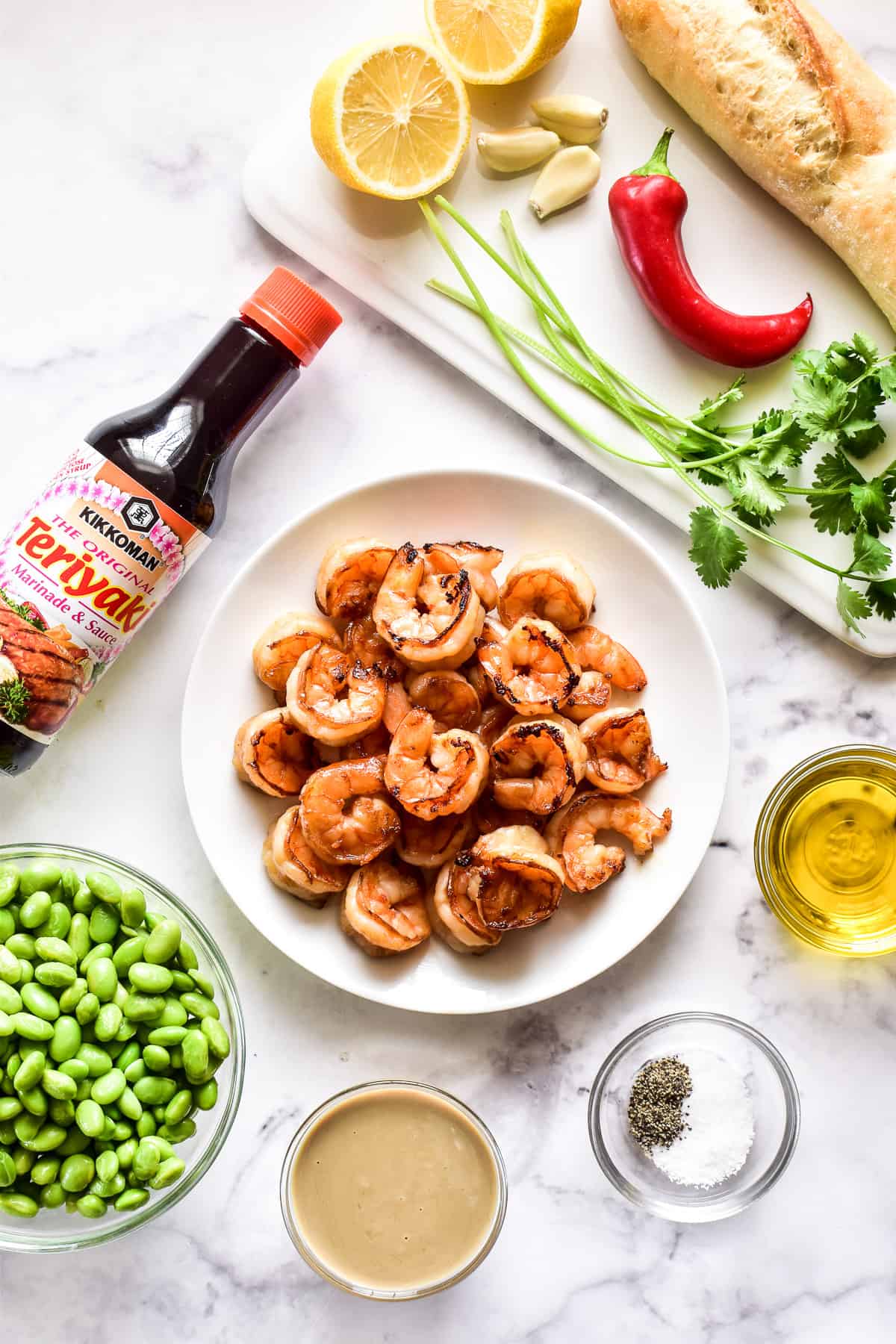 How to make Teriyaki Shrimp Crostini

Bake the crostini - While the shrimp is marinating, slice the baguette into thin slices and bake them until crispy.

Make the hummus - Making the hummus is as easy as combining all the ingredients in a high-powered blender or food processor and blending until smooth and creamy. This step can also be done in advance and stored in the refrigerator for later.

Grill the shrimp - Once the shrimp has been marinating for at least 30 minutes, it's ready to be cooked. I grilled mine, but you can also pan fry it.

Assemble the crostini - The final step is assembling the crostini by topping each slice of bread with hummus, grilled shrimp, and garnishes. 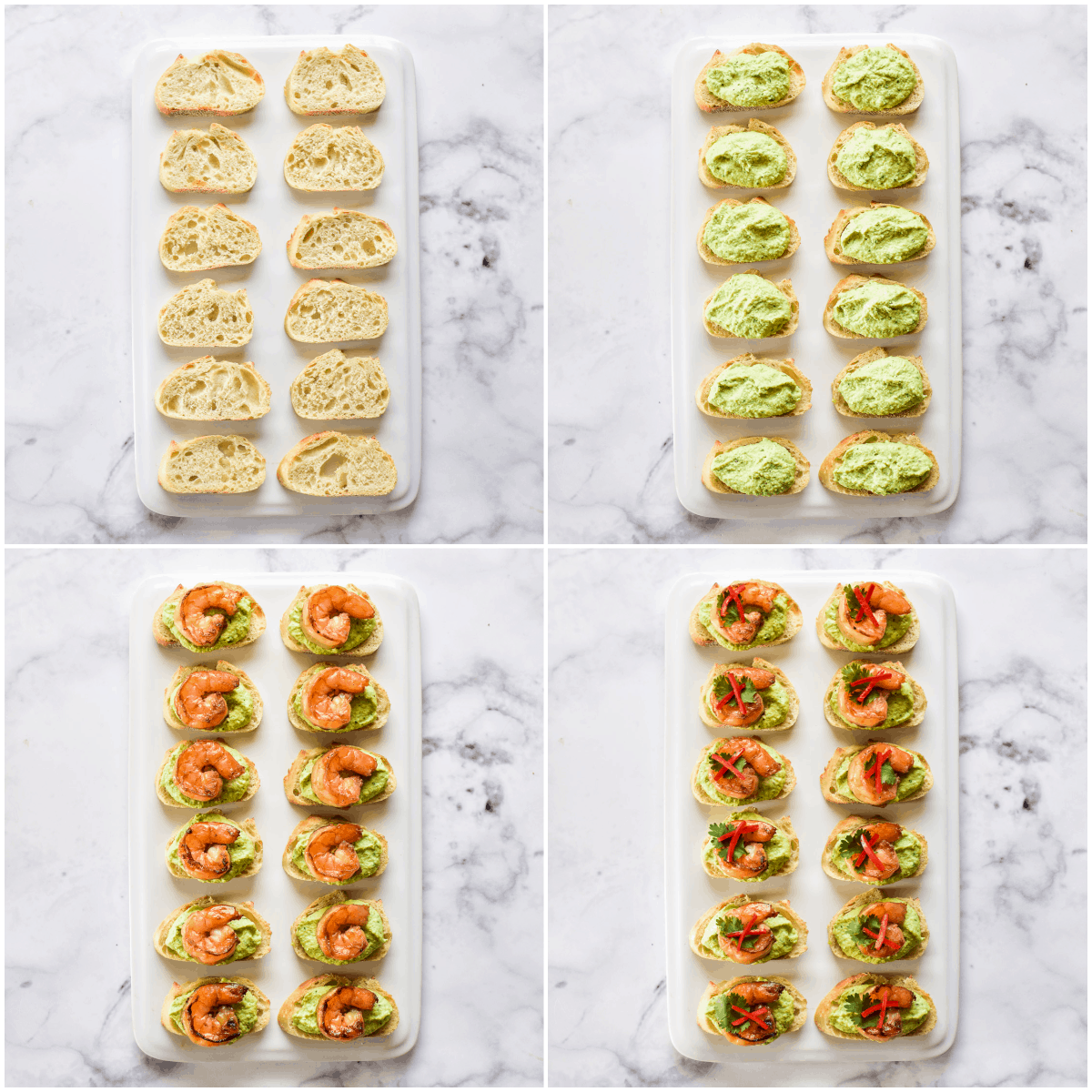 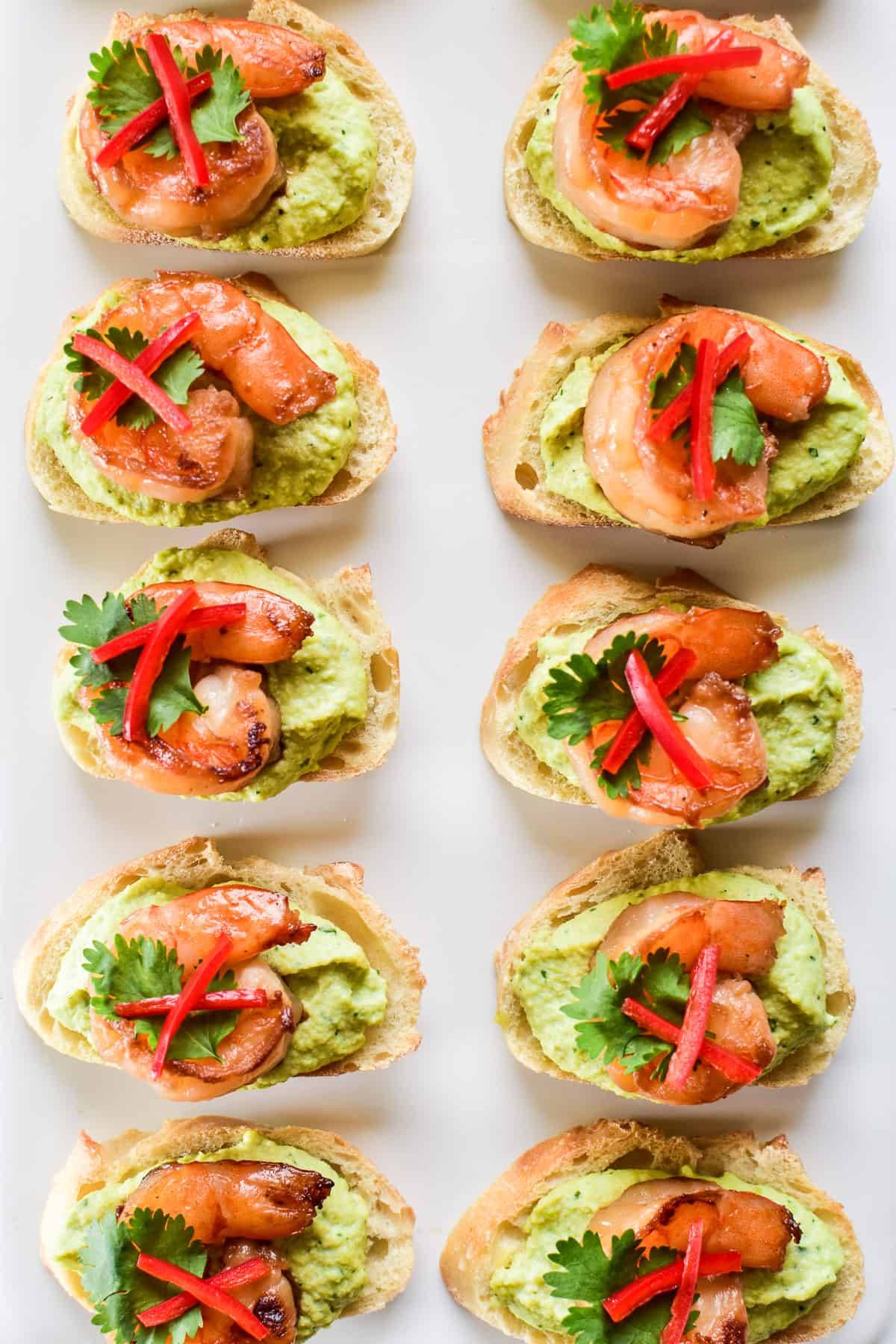 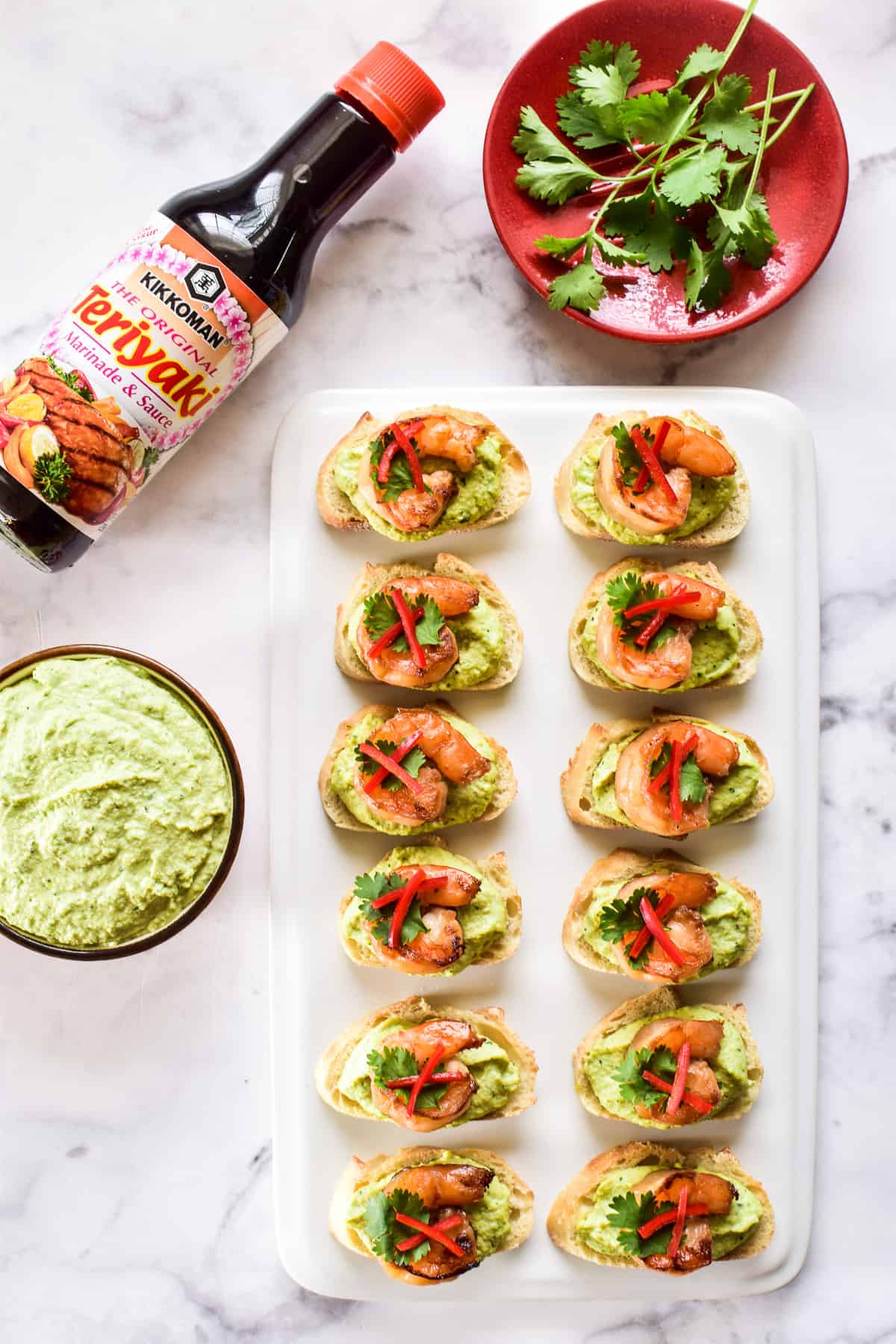