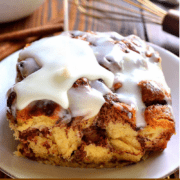 Take cinnamon rolls to the next level with this ooey, gooey Cinnamon Roll French Toast Casserole! It’s easy to make ahead, ready in just 30 minutes, and has a flavor combination that no one can resist.

Not only is it incredibly easy to make, and has a healthy dose of cinnamon (which I love), but it’s the perfect breakfast recipe for special brunches, holidays, and get togethers.

We’ve made it for several holiday brunches and it’s a guaranteed win.

With all the different types of cream cheese out there, you can even play with the flavors a little. I’d suggest trying a Brown Sugar Cinnamon or Honey Pecan flavor for a twist on the icing.

If you’re looking for a dairy-alternative to the milk, I would use coconut milk. It has a creamy consistency and a flavor that would naturally complement the other ingredients.

One thing I LOVE about this recipe is that it’s incredibly easy, from start to finish. Start by brushing the bottom and sides of a 9×13 inch pan with melted butter, then spread the cinnamon roll pieces in the pan.

You’ll know the casserole is done when it’s dark golden brown and crispy on top. If you still see any doughiness in the cinnamon rolls, you’ll want to pop it back in for a few more minutes.

The cinnamon rolls come with their own icing container, but for this recipe I added to the prepared icing by combining it with cream cheese, powdered sugar, and milk and whisking it until smooth. To me, cinnamon rolls just aren’t the same without cream cheese icing… and I even have a recipe for extra icing just in case you love it as much as I do.

This recipe makes an amazing centerpiece for any special brunch. If you’re looking for additional dishes to add to your menu, here are some I’d recommend.