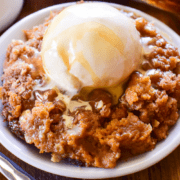 All the flavors of pumpkin pie in an easy, delicious crisp! This Pumpkin Crisp is oven-ready in just 10 minutes and perfect for all your fall gatherings!

If there’s one dessert I ALWAYS love… it’s a crisp. Whether it’s Peach Crisp or Blueberry Crisp or our favorite Apple Pear Crisp, there’s just something about that delicious topping I can’t resist. Truth be told… I like it better than pie!

And not JUST because of the topping (although the topping is truly the best part). But it’s also SO quick and easy to make that you just can’t go wrong. It was one of my favorite desserts growing up, and as they say… some things never change.

This Pumpkin Crisp is THE perfect fall dessert. It combines the deliciousness of pumpkin pie with the ease of a crisp… and it’s 100% guaranteed to be a fast favorite.

what you’ll need for this recipe

Pumpkin puree – 1 can of pumpkin puree forms the base of this pumpkin crisp, and can be found in the baking aisle year round. Be sure to grab pure pumpkin puree, not pumpkin pie filling, as pie filling is already sweetened and flavored.

Eggs – Eggs help to make the filling deliciously rich and creamy, and they also help to “set” the filling during baking. I used 3 large eggs in this recipe.

Evaporated milk – This recipe calls for 1 can of evaporated milk, which is milk that has been heated so that 60% of the water content evaporates. Reducing the amount of water gives the milk a smooth, creamy texture that pumpkin pie is known for.

Sugar – This recipe calls for both granulated and brown sugar. The filling uses equal parts (1/2 cup) of each, and the topping uses 1 cup of brown sugar. I used light brown sugar, but you can substitute dark if you have it on hand.

Flour – For the topping, you’ll need 3/4 cup of flour. I used all purpose, but you can feel free to substitute whole wheat, gluten free, or any type you prefer.

Oats – I always add oats to my topping because they give it such a delicious flavor and texture. I used rolled oats because they’re larger and more hearty than quick oats, but you can substitute any type you have on hand.

Butter – No crisp topping is complete without butter! I prefer using salted butter since it helps bring out all the other flavors in the recipe. You can use either salted or unsalted.

how to make pumpkin crisp

Make the topping. In a small mixing bowl, combine the flour, oats, brown sugar, butter, and cinnamon. Use a fork to mix just until combined. The mixture will be lumpy, which is exactly what you want! Refrigerate the topping while you prepare the filling.

Make the filling. In a separate large mixing bowl, combine the pumpkin puree, eggs, evaporated milk, sugars, and spices. Mix by hand or using a hand mixer until completely combined. Pour the filling into a greased 8×11 inch baking pan.

Combine and bake. Remove the topping from the refrigerator and crumble it evenly over the filling in the pan. Bake at 375°F for 45-50 minutes, until the topping is dark golden brown and crispy.

how to make the best pumpkin crisp

The BEST Pumpkin Crisp comes down to one thing: the topping! Since this recipe calls for melted butter, it’s important to mix the topping first and refrigerate it while you’re preparing the filling. This will help make it extra crispy and hold its shape during baking!